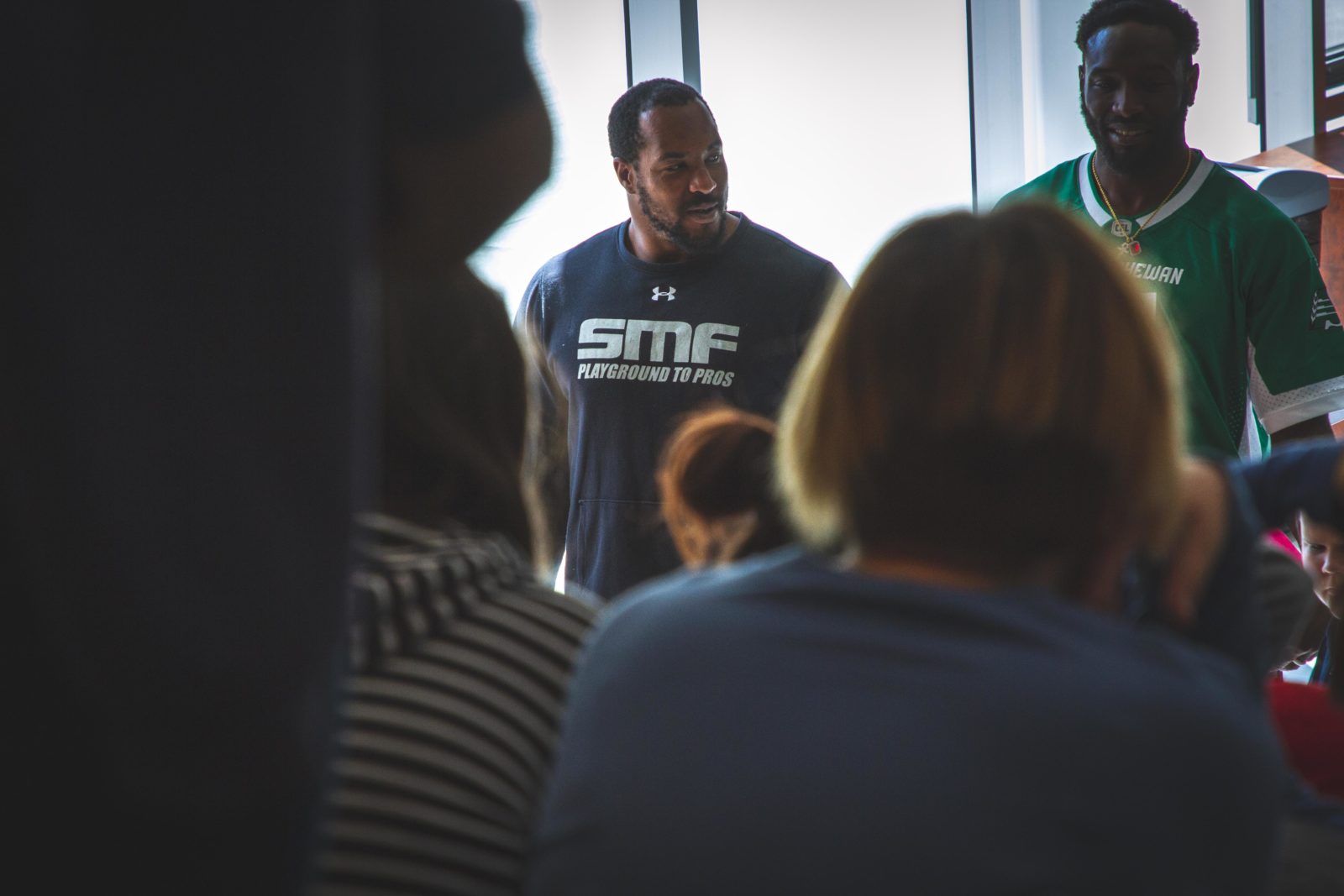 The Saskatchewan Roughriders’ defensive tackle has a special connection to Scott Collegiate, so he organized a drive that provided some 60 backpacks to Grade 9 students at the school on their first day. 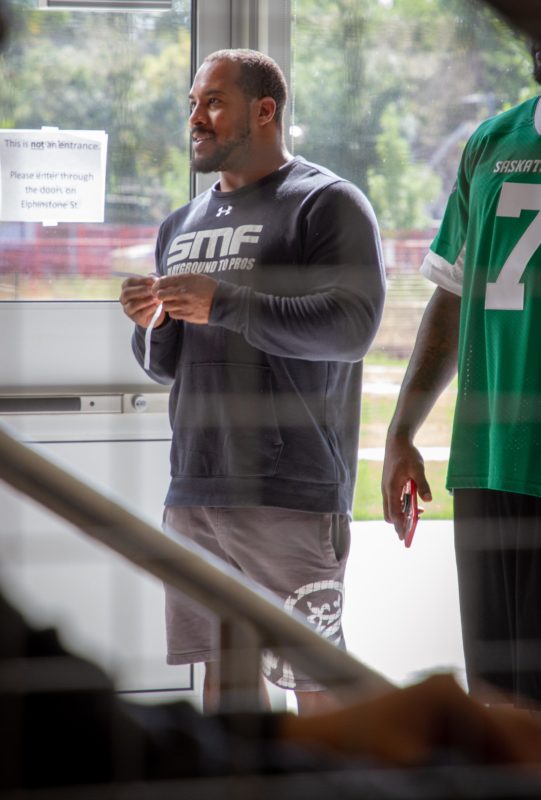 It’s the second straight year that Henry has done the deed. On Tuesday, Henry, defensive end Willie Jefferson and defensive backs Jovon Johnson and Marcell Young were on hand to give away the backpacks.

“Sometimes it’s the little things that can help,” Henry said. “When I was younger, some people didn’t have backpacks and that alone made them not want to go to school; they didn’t have the stuff to go to classes.

“This isn’t much, but at least it’s something that maybe will help them get where they need to go.”

Henry asked his mates on the CFL team to buy backpacks and fill them with things ranging from school supplies to lunch boxes. He also asked the players to write notes and put them in the bags to motivate the recipients.

Henry’s backpack drive is the second staged by a Roughriders player this summer. Johnson also put one together — and he’ll be handing out some 480 backpacks next week to students in Saskatoon and Regina.

“Given the status that we have, it’s important for us to do things like this in the community,” Johnson said. “It allows kids who may not have the necessities to start off the school year well, give them things they need and help them so they can focus more on education and not so much on what they need.”

Johnson’s efforts are based in his own past. When he was growing up in Erie, Pa., he star 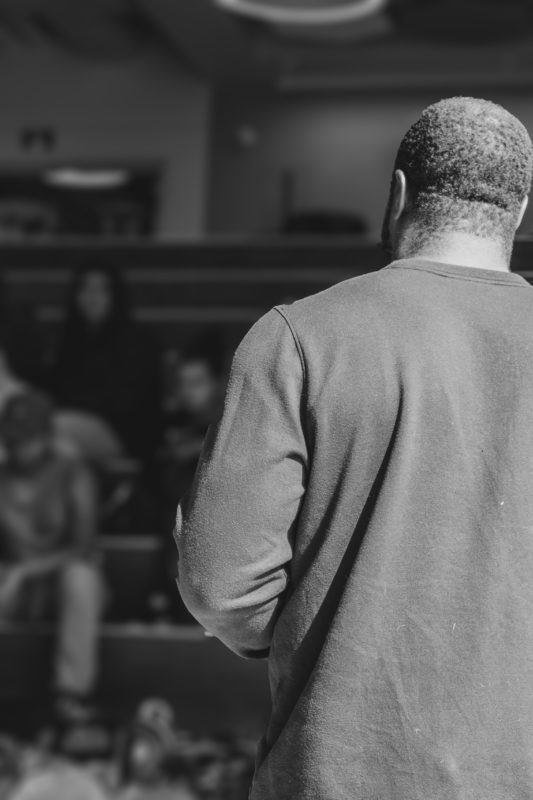 ted school years carrying his books under his arm instead of in a backpack.

“I’d see all my friends with backpacks and I knew that my parents couldn’t afford one,” he said. “As the years went on, I kind of got used to it and never really thought about it.

“As we get older, we’re more fortunate and we’re in a position to give back to kids who have a similar story to what I had.”

Henry has been helping out at Scott for the past two years, going to the school to interact with the students whenever and however he can. He even borrowed a camera from the Roughriders to videotape a Scott basketball player in hopes of helping the teen land a post-secondary basketball scholarship.

On Tuesday, Henry created his first connection with the Grade 9 students.

“I want them to know that someone’s here for them,” he said. “If they need to talk, I’m here. If they need help with something, I’m here.”

Harris’ first carry was one of his shortest of the game, though, as Henry took him down with a solid tackle after just two yards.

Henry laughed when asked if the violent nature of the tackle harkened back to the 2008 Canadian Bowl, when Harris — then of the Vancouver Island Raiders — rushed 32 times for 410 yards and four touchdowns in a 35-8 victory over Henry’s Burlington Braves.

“Nah, I was just trying to get a two-and-out, get off the field and get the offence the ball,” Henry said. “That was it. I was just doing my job.”

The Roughriders’ defence will try to do its job against Harris on Saturday, when the Bombers play host to a rematch (2 p.m., CKRM, TSN).

“You’ve got to take your hat off to him,” Henry said. “He got out of situations (Sunday) where he was in people’s grasps and the play should have been done in my eyes but he kept going. All we can do is try to figure out a game plan to try to make him less effective next time.”

The Roughriders practised Wednesday with crowd noise blaring through the Mosaic Stadium speakers, preparing for the atmosphere inside Investors Group Field on Saturday.

The Bombers announced earlier in the day that the game is sold out, which could mean a lot of noise when Saskatchewan’s offence has the ball. 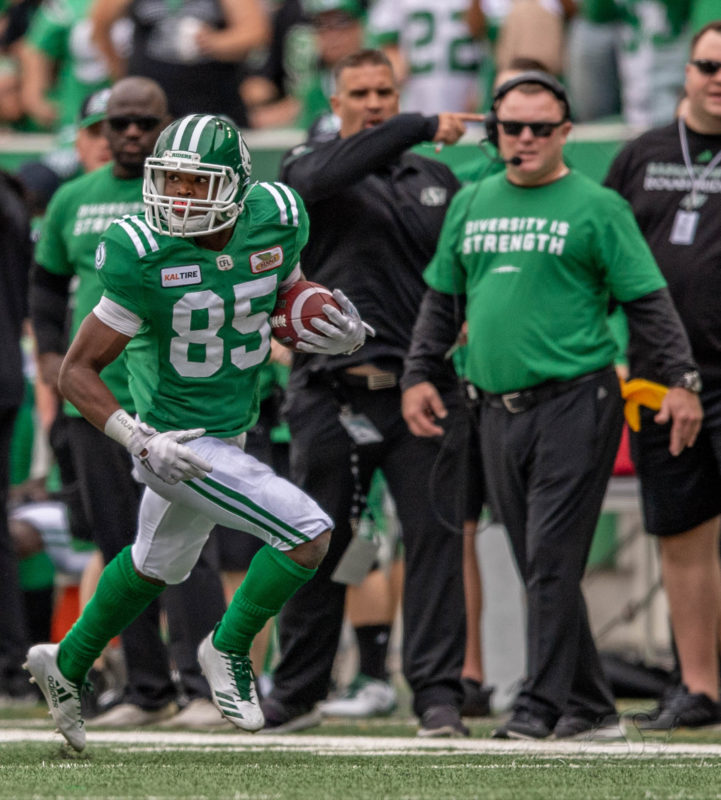 “Every time you go to Winnipeg regardless of the situation, it’s a very loud stadium,” Roughriders head coach-GM Chris Jones said. “They’ve got a very good, supportive fan base and they’re very well-educated too. They know when to be loud and when not to.”

“It’s always annoying, but it’s something that you have to do,” quarterback Zach Collaros said. “Winnipeg is an amazing place to play. It’s very loud in there, so we’re going to have to be able to work our silent counts, be able to go on 2 — all those different things that you can do when you’re at home.

“That was the main focus of the day with some of the new install that we put in and I thought the guys did a good job. But you kind of get a headache after a while.”

Jones’ green “Diversity of Strength” T-shirt came up during a CFL conference call featuring members of the Roughriders and Bombers.

Saskatchewan is 3-0 since Jones put on the shirt instead of going with his traditional all-black look.