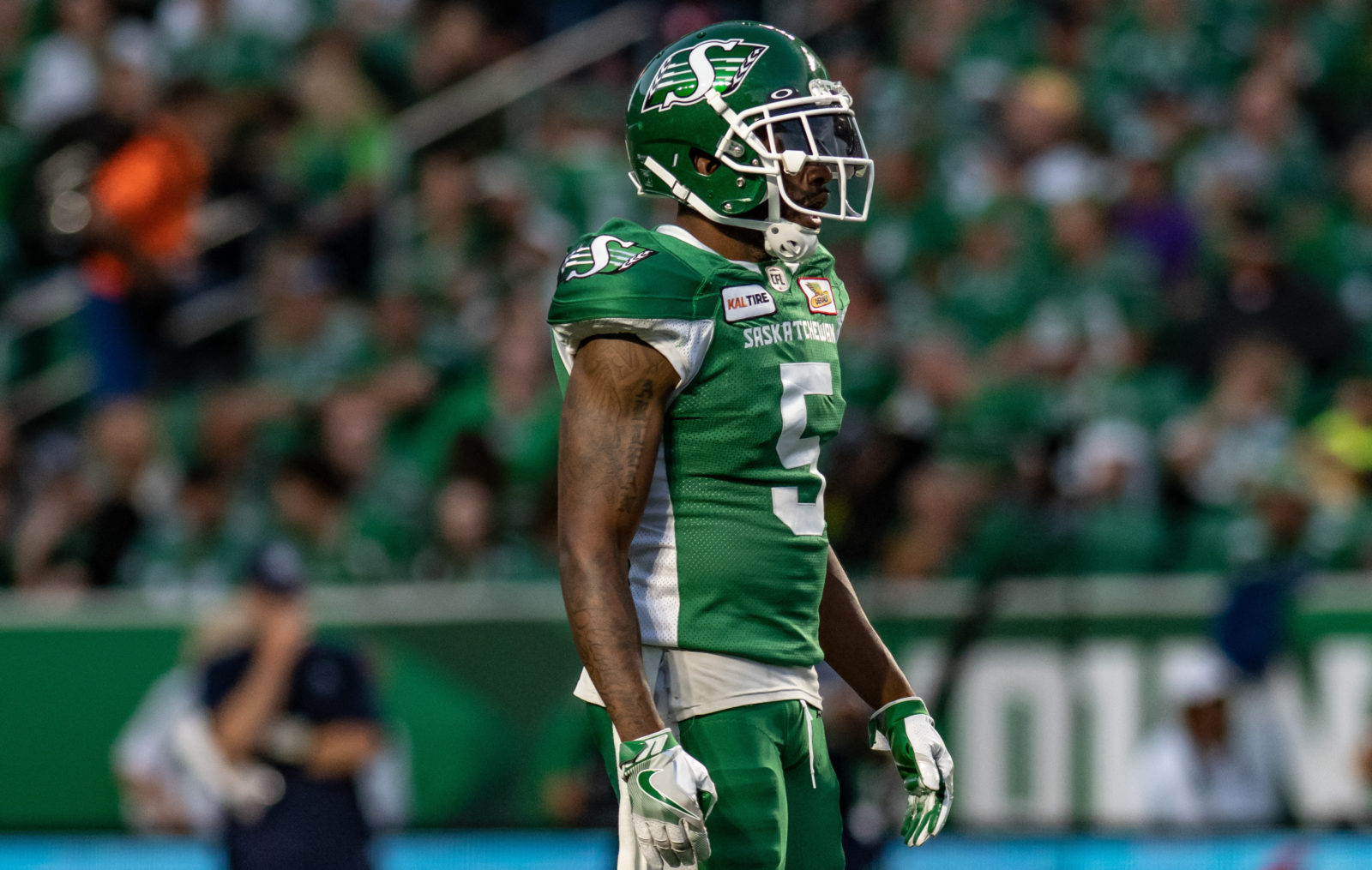 VANCOUVER — A little time off seemed to agree with Crezdon Butler.

The Saskatchewan Roughriders’ defensive back was a healthy scratch for his CFL team’s game against the Calgary Stampeders on Aug. 19, the first time he had missed a game since moving into the Roughriders’ starting lineup early in the 2017 regular season.

The 31-year-old was back in the lineup Saturday against the B.C. Lions — and he played a key role in the Roughriders’ 24-21 victory at BC Place. 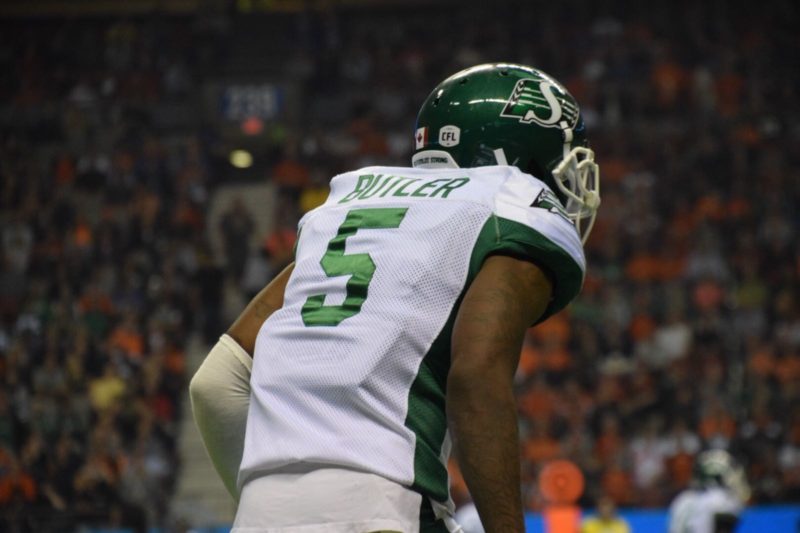 “It’s a business,” Butler said when asked if he was motivated by being scratched against Calgary. “We have a lot of great guys on defence and especially in the secondary.

“(Head coach-GM Chris Jones) asked me how I felt about it. Of course you’re not going to feel good about it, but it’s a team game — and I’m going to do whatever it takes to help the team win.”

Jones had said earlier in the week that he was going to use the Roughriders’ depth in the secondary to give his older defensive backs a rest. The hope is that the DBs will be fresh down the stretch.

Being scratched may not have felt good to Butler, but he accepted his fate.

“You’ve just got to get over it,” he said. “The season’s going to go on, right? It’s not going to stop just because you’re active or inactive. You’ve got to take it as it is and keep playing.”

On Saturday, Butler had two defensive tackles, one pass knockdown and one special-teams tackle. He recorded the latter statistic by chasing down Chris Rainey on a first-quarter kickoff return.

Had Butler not made the tackle after Rainey covered 74 yards, the B.C. returner would have scored a touchdown. Instead, the Roughriders’ defence held and the Lions had to settle for a field goal that cut Saskatchewan’s lead to 7-6.

“That’s a four-point swing when Crezdon ran him down,” Jones said. “He had the choice to go make a play on the ball and run a very fast guy down and give us a chance to take another snap — and that’s what he did. That’s the identity of our football team.” 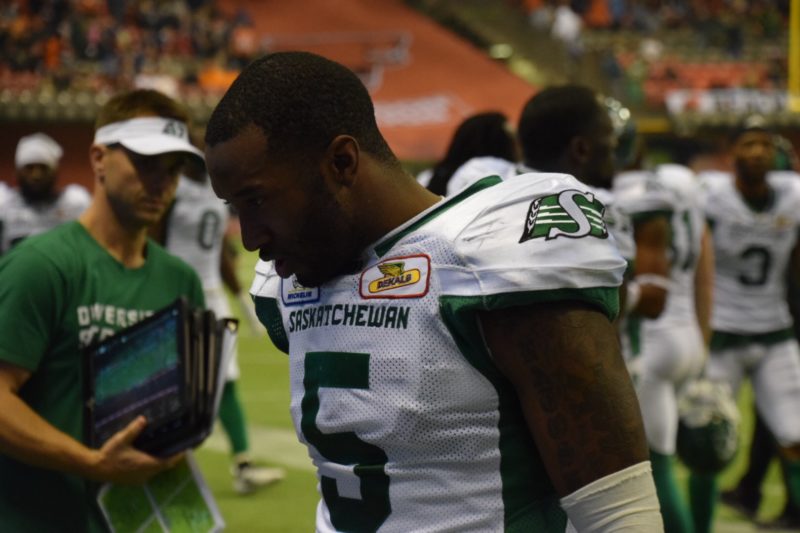 “If you’re the safety in that position, you’re there to stop touchdowns,” Butler noted. “I didn’t stop running. I felt like Forrest Gump.”

Another effort play in the second quarter also saved a touchdown, albeit briefly.

Lions quarterback Travis Lulay appeared to have found Ricky Collins with a 10-yard TD pass, but Butler stripped the ball out of Collins’ hands before the catch was completed. On the next play, Lulay hit Bryan Burnham with the 10-yard scoring pass, rendering Butler’s knockdown moot.

Still, Butler had a solid game in his return to the lineup — which is what he expected of himself.

“If you think about it too much, you get out of your game,” Butler said. “I played this week, I did what I had to do and I did my job.”

Kyran Moore had a longer wait than Butler to get into the Roughriders’ lineup.

The rookie receiver had been on Saskatchewan’s practice roster since training camp before being activated for Saturday’s game.

Moore was used in a rotation with Devon Bailey and Christion Jones at slotback to replace Caleb Holley, who was put on the six-game injured list after hurting a leg in the game against Calgary.

In Moore’s first-ever CFL game, he recorded two receptions for 27 yards and one carry for 17 yards.

“I just wanted to do what I’d been doing in practice,” he said. “I was trying to help the team win.” 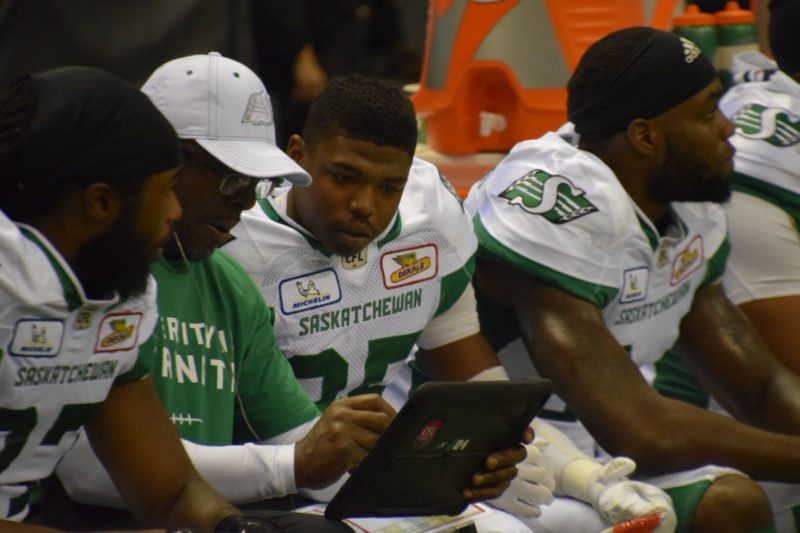 A product of Austin Peay University, the 5-foot-10, 165-pound Moore stood out during the Roughriders’ training camp. But he had to patiently await his turn in the lineup before it arrived Saturday.

“It’s tough, but it’s something I’ve been doing since high school,” he said. “I got one offer from a college on signing day and that was the last offer I got until Saskatchewan hit me up.

“I’ve been waiting my whole life, so it wasn’t anything new. I knew my time would come and I had to make sure I was prepared for when it came.”

Roughriders quarterback Zach Collaros got off to a fast start Saturday, completing seven of eight pass attempts in the first quarter for 113 yards.

He slowed down over the final three quarters, though, and finished with 19 completions in 32 attempts for 215 yards with one touchdown and one interception.

“He played decent,” Jones said of his QB. “He missed a couple of reads, he threw the late pick and he put the ball on the ground (before recovering it), so certainly it wasn’t perfect.

“He messed up like everybody else. He ain’t the only one who had errors, but his errors are more glaring because he has got the ball in his hand.”

During his college career at UCLA, Cameron Judge and the Bruins annually faced the USC Trojans in a cross-town rivalry game.

On Sept. 2, Judge will get a taste of the Roughriders’ heated rivalry with the Winnipeg Blue Bombers in the Labour Day Classic.

“I’m really excited to play in it,” said Saskatchewan’s second-year linebacker, who missed the 2017 contest due to injury. “I’ve heard nothing but good things about it. I saw that it’s already a sellout, so I’m ready to enjoy it.

“We know we’ll have our fans there and they’re always helping; they got us a couple of penalties against Calgary. Rider Nation is going to be in full effect, so I’m excited.”