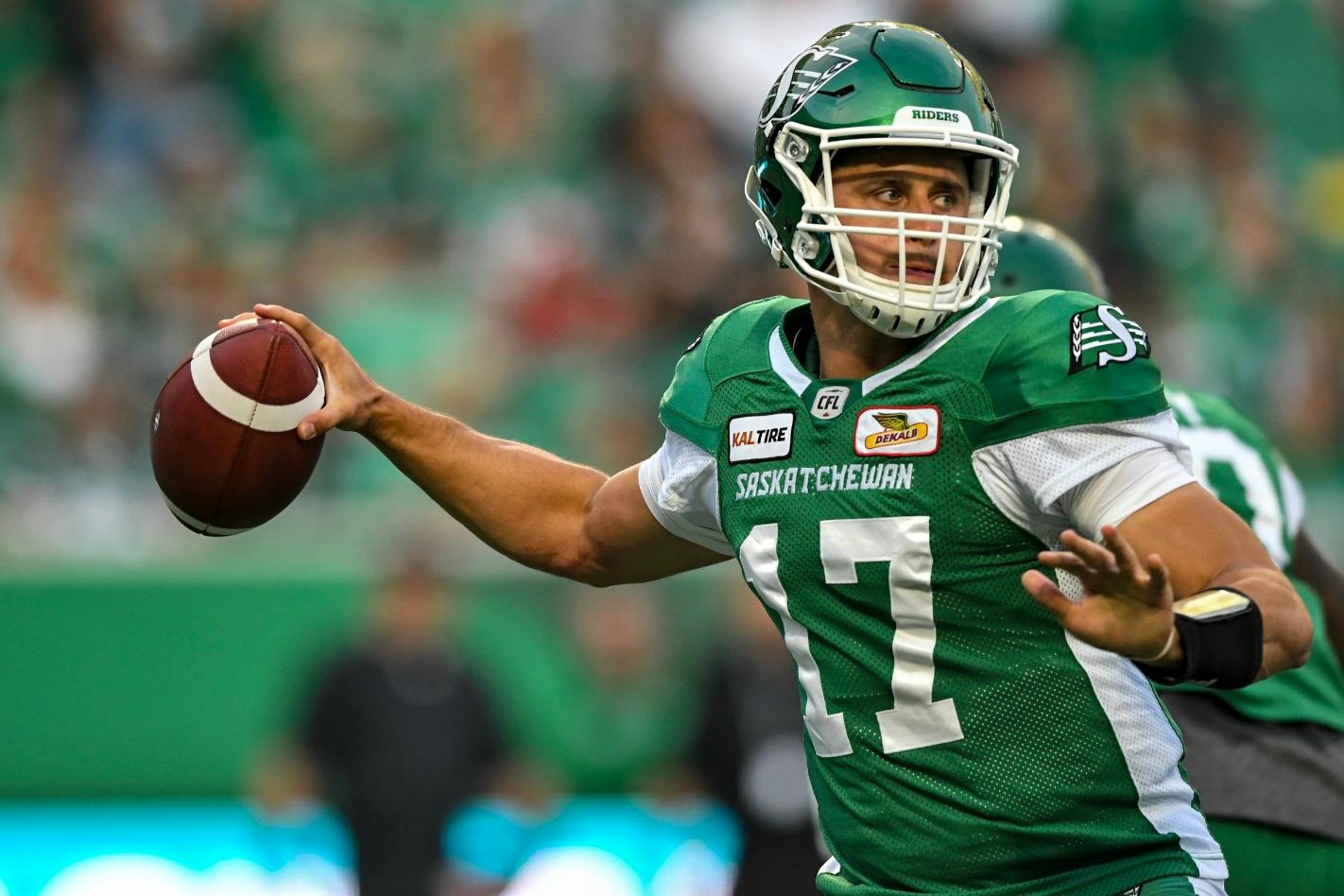 A small group of people know the identity of the Saskatchewan Roughriders’ starting quarterback.

On Monday, the rest of the world will be let in on the secret. That’s the day the CFL team will begin its on-field preparations for Friday’s regular-season opener against the visiting Toronto Argonauts.

“We’ve got to have a guy who knows he’s going in as the starter,” Roughriders head coach-GM Chris Jones said after Friday’s 39-12 CFL pre-season loss to the Calgary Stampeders at Mosaic Stadium. “I’ve got the luxury of having a guy who helped us win 10 football games last year (Brandon Bridge), so if a guy (like Zach Collaros) is struggling, then Brandon Bridge will play — or it’ll be opposite.

“Collaros has started a lot of games and been a good football player for a long time and he has won too many football games to be rusty forever. It’ll knock off. It’s the first time he has been in our offence in a couple or three years. That’s going to be the telltale thing: Next time he gets an opportunity, is he a little sharper than what he was (Friday)?”

Jones said repeatedly after acquiring Collaros from the Hamilton Tiger-Cats on Jan. 3 that an open competition would be held between Collaros and Bridge to determine the starter.

Neither man played during Saskatchewan’s pre-season game May 27 against the host Edmonton Eskimos, so Friday’s contest was expected to be the last test for the two QBs.

The plan was to play Collaros in the first quarter and Bridge in the second before rotating them in the third and fourth quarters. That plan went out the window midway through the third quarter when Collaros was sandwiched between two defenders.

Unhappy with the play of the offensive line, Jones used David Watford and B.J. Daniels over the final quarter and a half, believing that their mobility could help them get out of trouble if the protection broke down.

Collaros was at the controls of the offence for eight possessions. He finished with six completions in 16 pass attempts for 41 yards and led the Roughriders to a field goal.

“It seemed like a lot of things (weren’t working),” he said after the game. “We just really couldn’t get into a rhythm and get the ball rolling.”

Collaros said he wanted to watch the film before grading his performance, but admitted it was “not very good.” Asked where he believes he stood in the competition with Bridge, Collaros replied: “I’m just trying to do the best that I can every day and whatever’s decided is decided.”

“Collaros looks a little bit rusty,” Jones noted. “The ball didn’t come out of his hand as quickly as I’d like and he missed two deep throws.”

Bridge took the reins on Saskatchewan’s second possession of the second quarter — and was sacked on his first play. He got eight more snaps (two of which included penalties) before his night was ended by Jones. 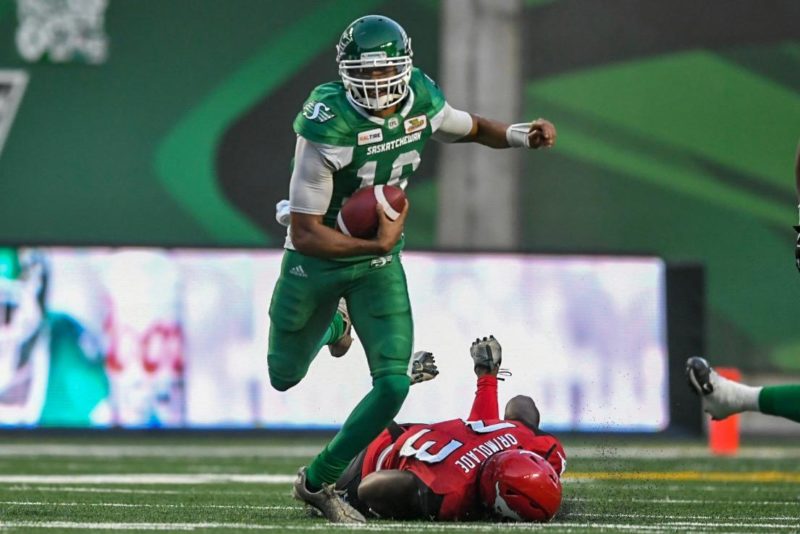 Bridge completed two of five pass attempts for 21 yards. All three of his possessions ended in punts.

“I don’t know if you can really define what I can do in (nine) snaps,” said Bridge, who started one regular-season game in 2017 and came on in relief of starter Kevin Glenn in 11 others.

“I think the coaches saw what they wanted to see out of me last year. This year, I only had (nine) snaps this whole pre-season. I think the coaches are confident in what I can do and I’m just going to be ready if my number is called.”

Jones confirmed Bridge’s take on the situation. When it was pointed out that Bridge hadn’t played much Friday, Jones replied: “I saw Bridge all last year. I’m good with him.”

Watford, who started and played the first half of Saskatchewan’s pre-season contest in Edmonton, got three series of work Friday. He went 9-for-17 for 172 yards with a touchdown (a 34-yarder to Caleb Holley) and an interception (which was recorded at the Calgary goal line).

B.J. Daniels ran the offence for two series, going 0-for-3 passing with two interceptions (including one at the Stamps’ goal line).

Jones admitted the Roughriders likely were “over-aggressive” with their play-calling when the third- and fourth-stringers were in the game, which led to the interceptions.

The game in Edmonton was Watford’s first as a quarterback in three seasons — he had been moved to receiver by the NFL’s Philadelphia Eagles — so his comfort level Friday was higher by comparison. 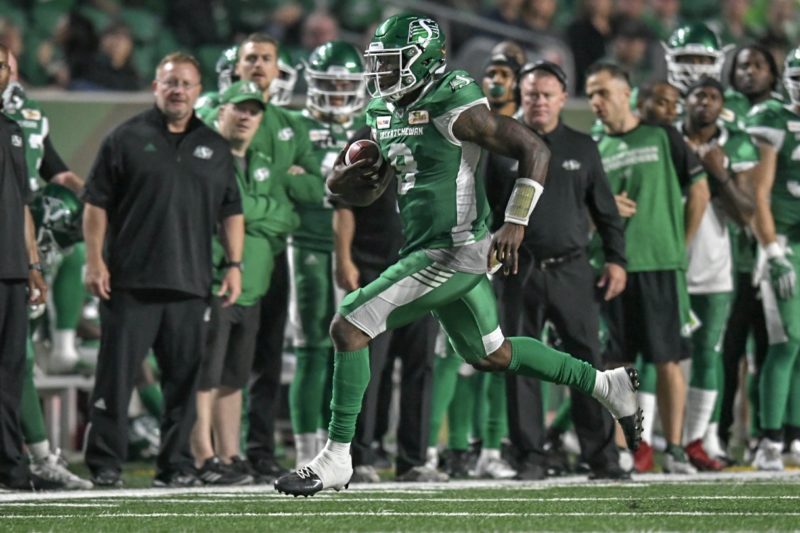 “I’m just trying to put my best effort out there, put out the best film I can put out and let the chips fall where they may,” he said. “The coaches have to make the decision; I just want to make it as tough on them as possible.”

The Roughriders had three first downs and 72 net yards in the first half Friday before recording 12 first downs and 204 yards in the second half. A number of front-line players were on the roster after being given the day off in Edmonton, but the offence’s production didn’t spike with them in the lineup.

“You can probably tell by the way that I’m feeling right now that I’m not very pleased with the way we played in the first and second quarter,” Jones said. “(The Stamps) had their B group against our A-group offence in the second quarter and we didn’t do anything.”