Training camp: A look at the offence 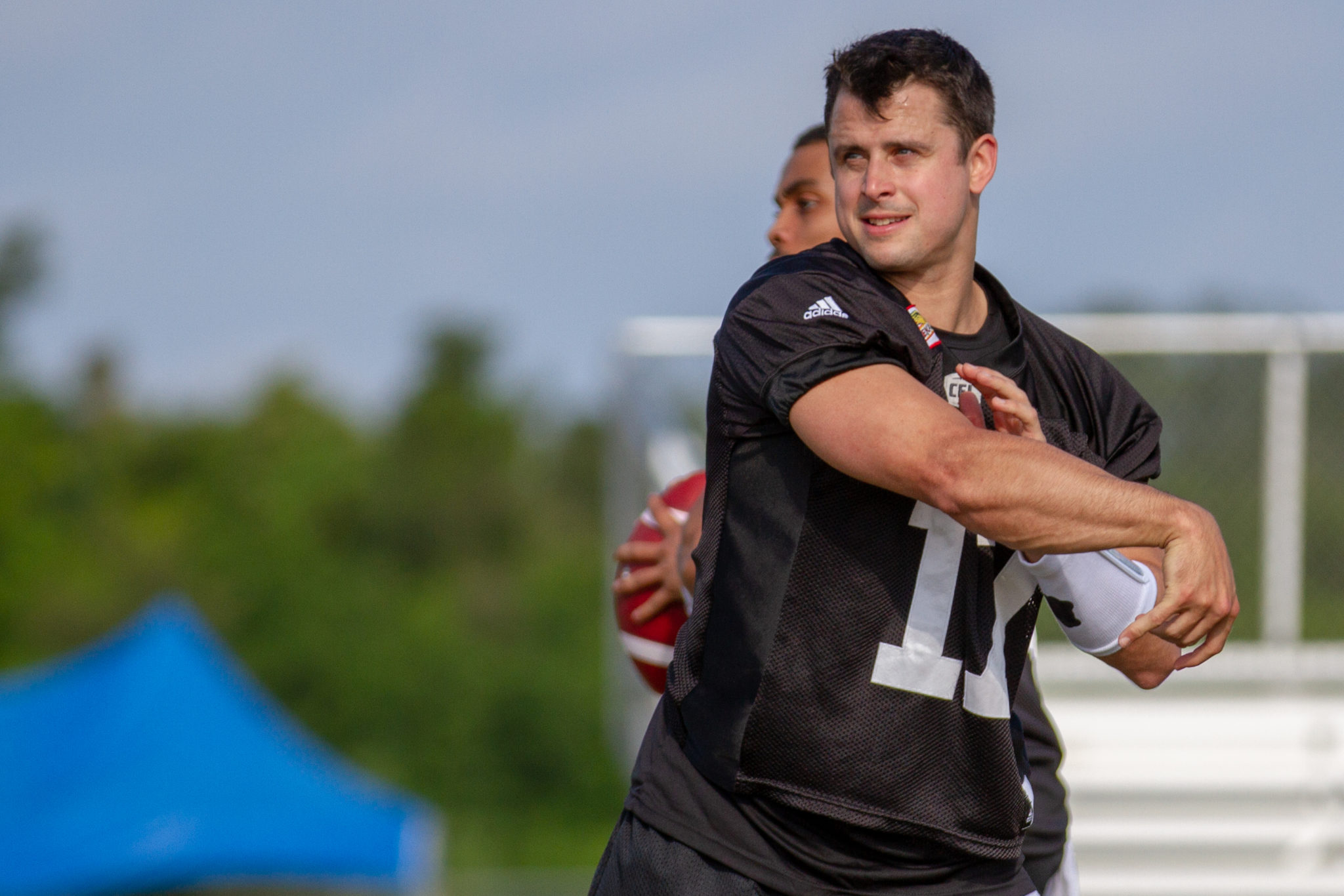 Training camp: A look at the offence

The Saskatchewan Roughriders launched an effective air attack at opponents during the 2017 CFL season.

Quarterbacks Kevin Glenn (25) and Brandon Bridge (10) combined to throw 35 touchdown passes during the 2017 regular season, a total that led the league.

The Roughriders were seventh in the CFL in pass attempts (610) and completions (411) and fifth in passing yards per game (293.4), but the QBs made their throws count in TD passes and average gain per pass (8.7 yards, second-best in the league).

Those numbers were markedly better than they had been in 2016. That season, Saskatchewan finished last in the league in passing TDs (16), eighth in average gain per pass (7.6 yards) and seventh in passing yards per game (278.7).

The Roughriders will have a new man at the controls this season following the off-season release of Glenn. Bridge will battle Zach Collaros, Marquise Williams and David Watford for the No. 1 job during training camp, which opens Sunday in Saskatoon.

Here’s a look at the Roughriders’ offensive personnel entering camp:

Collaros, who was acquired from the Hamilton Tiger-Cats in January, is the presumed starter as camp approaches. But head coach-GM Chris Jones has stressed many times since the trade that the job remains open and the competition during camp will decide the starter.

Collaros is eager to rediscover his form from 2015, when he was the frontrunner to be named the CFL’s most outstanding player before a knee injury prematurely ended his season. 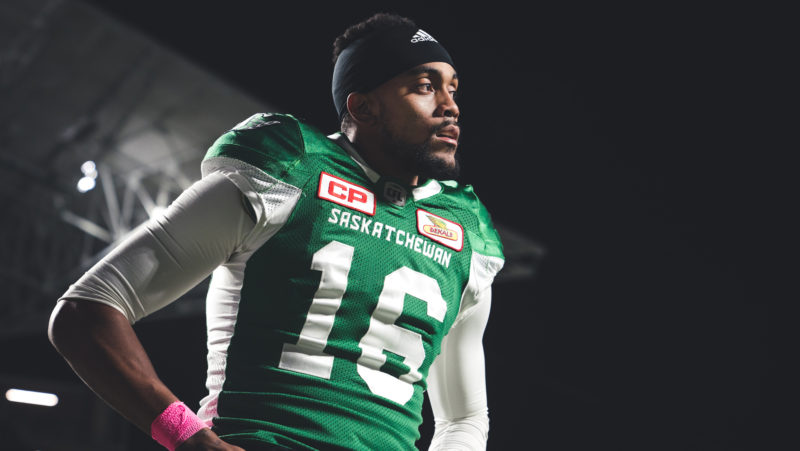 He hasn’t approached that level of play since and, in 2017, lost the starting job in Hamilton to Jeremiah Masoli after the Tiger-Cats lost their first eight regular-season games.

Collaros previously played in Saskatchewan’s favoured style of offence, having worked with Roughriders offensive co-ordinator Stephen McAdoo when both men were employed by the Toronto Argonauts. That comfort level should help Collaros in his first season with the Green and White.

Collaros completed 167 of 266 pass attempts for 1,767 yards with eight TDs and seven interceptions in 2017. His average of 6.6 yards per pass tied him for 19th among all CFL quarterbacks.

Bridge started one game for the Roughriders last season, but appeared in a total of 12 regular-season contests. He also relieved Glenn in the Eastern Final.

During a season in which he saw more action than ever before in his CFL career, Bridge’s quarterback efficiency rating (107.0) and average yards per pass (9.0) were the second-best such numbers among CFL QBs who threw more than 100 passes.

Williams and Watford have yet to appear in a regular-season game in the CFL.

The Roughriders went through a bevy of tailbacks last season, with Cameron Marshall, Trent Richardson, Kienan LaFrance, Greg Morris and Marcus Thigpen combining for 238 of the team’s 305 rushing attempts.

Marshall and Thigpen are to be at camp, but Jones recently told reporters that Richardson likely won’t be in Saskatoon when camp opens due to a personal issue. LaFrance and Morris signed with other teams during the off-season. 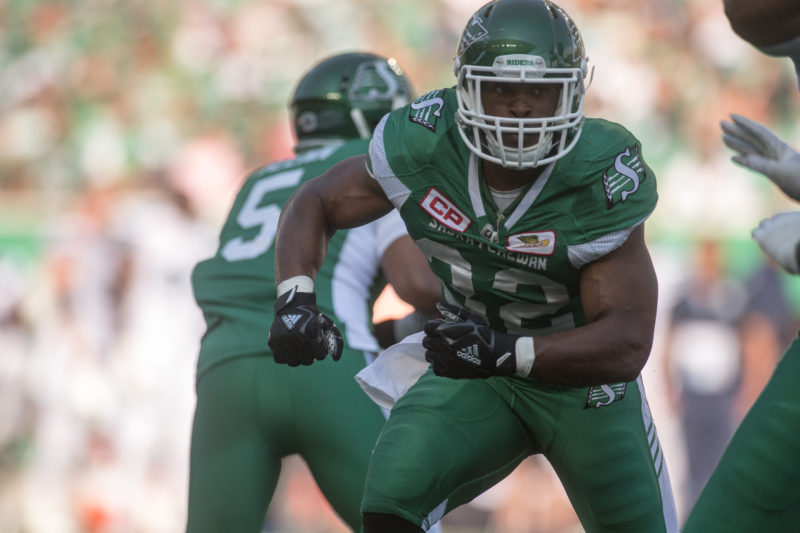 Marshall won the starting job in camp last season, but a knee injury limited him to just 10 games. He still led the Roughriders in rushing with 543 yards and added 30 receptions out of the backfield.

Thigpen was the star of the 2017 Eastern Semi-Final, in which he rushed 15 times for 169 yards and a touchdown as Saskatchewan beat the host Ottawa Redblacks. But Thigpen is to miss the first two games of his 2018 campaign due to a doping violation, which could affect his chances of being the starter.

Joining the returnees is Jerome Messam, who signed as a free agent in February.

The 33-year-old product of Toronto is coming off a 2017 season in which his league-high 215 carries for the Calgary Stampeders yielded 1,016 yards, the third-highest total in the CFL.

Messam’s Canadian citizenship could help him in the battle for the No. 1 job.

Spencer Moore is a veteran at fullback and his backup, Albert Awachie, continues to learn the ropes. Bryce Vieira will be at camp after being signed as an undrafted free agent. 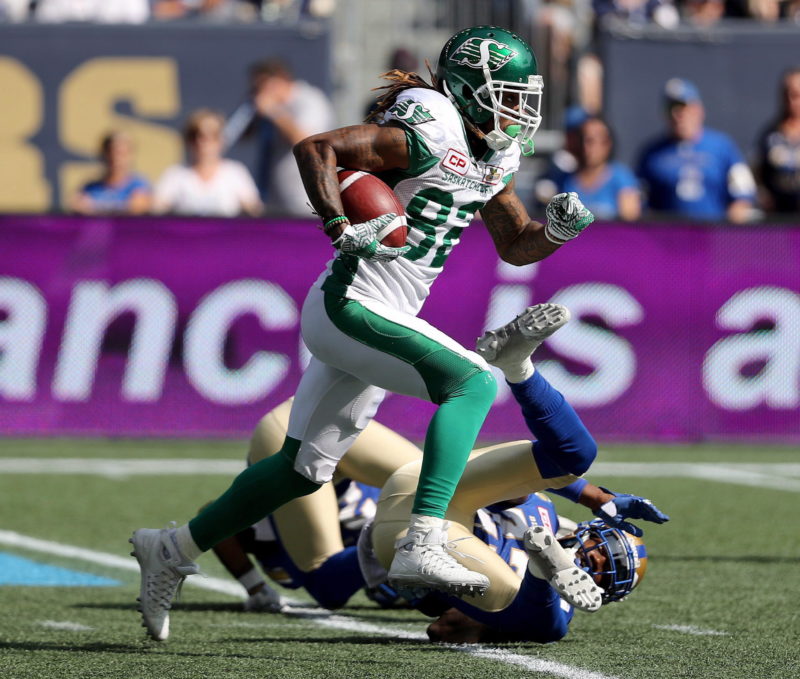 In other words, the Roughriders remain loaded at receiver.

Carter and Roosevelt tied for the team lead in 2017 with eight touchdown catches each, with Bakari Grant and Holley tied for third with five apiece.

Mitch Picton, a 2017 draft pick who attended camp last season before returning to the University of Regina, will be in Saskatoon to push for a spot. So will Jake Harty, who was signed as a free agent from Ottawa.

Off-season signing Shaq Evans and Jordan Williams-Lambert — who stood out during mini-camp in Florida — will have to make an impression early in camp if they’re to crack a deep roster of receivers.

Bruce Campbell, Derek Dennis and Peter Dyakowski — all of whom had regular roles in 2017 — are gone, so replacements must be found. 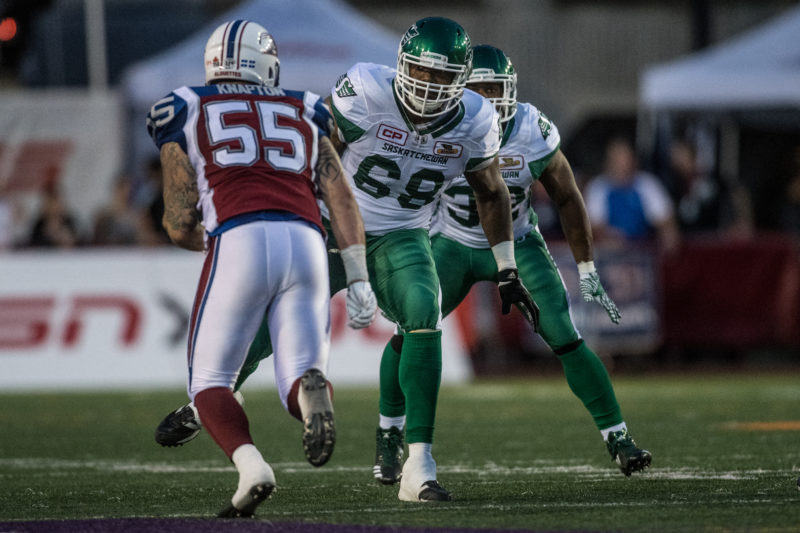 The battle to replace Campbell at left tackle is expected to involve off-season addition Takoby Cofield and two players — Jarvis Harrison and Terran Vaughn — who were on the practice roster last season. Josiah St. John, the No. 1 overall pick in the 2016 CFL draft, also could be in the mix.

Jones already has said that free-agent signing Travis Bond will play one guard spot, but it’s unclear if he’ll be on the left or right side.

Veterans Dan Clark and Brendon LaBatte and sophomore Dariusz Bladek likely will compete for the other two interior spots, while Thaddeus Coleman is slated to be the right tackle.

The Roughriders surrendered 44 sacks last season, the third-highest total in the league. As well, the team’s ground game produced 99 first downs (tied for last in the league) and an average of 82.1 yards per game (last).

The chemistry the linemen develop during training camp will be vital if the offence is to repeat its performance of 2017.