Notebook: Duron Carter isn’t sure what to expect 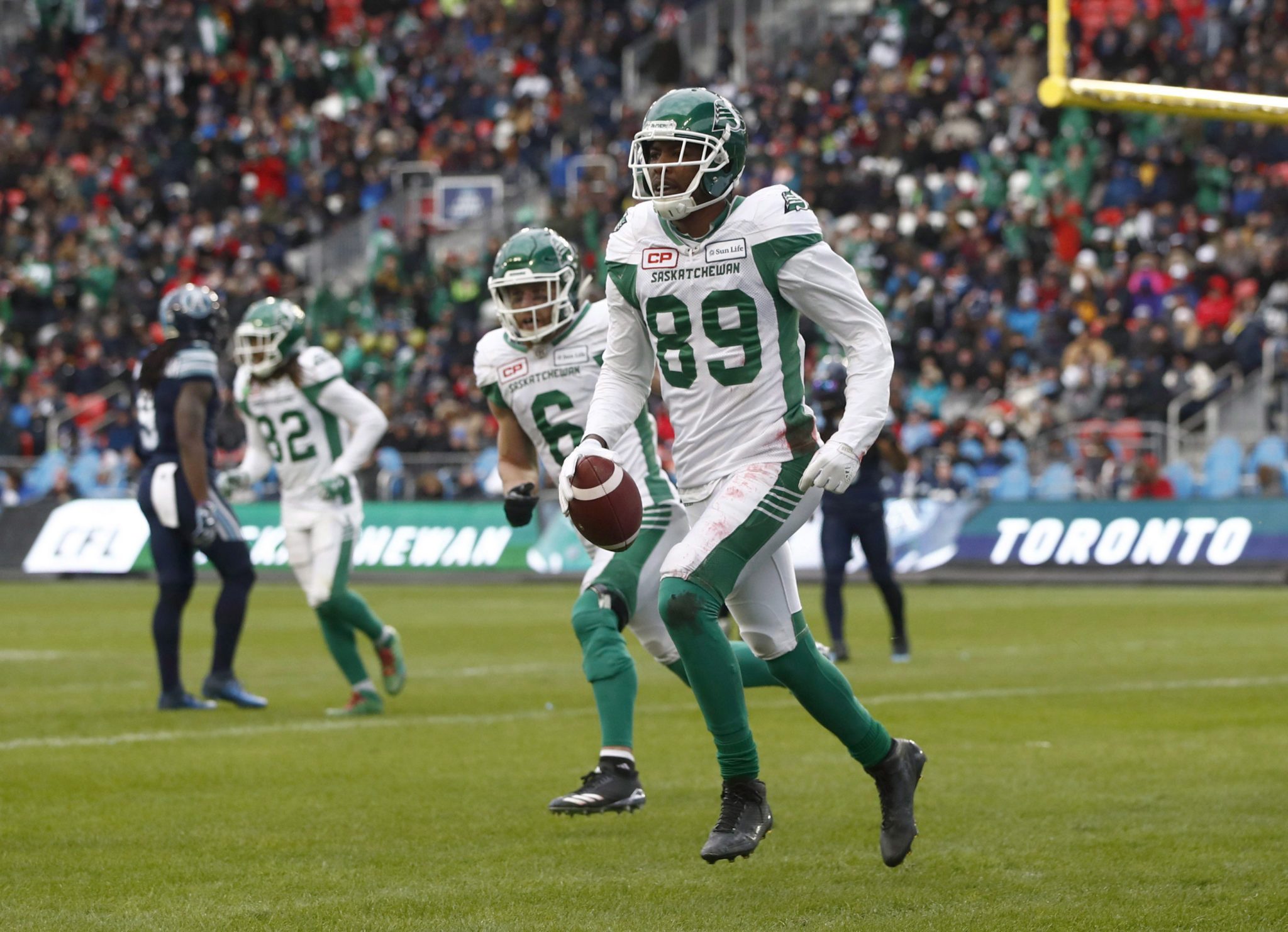 Notebook: Duron Carter isn’t sure what to expect

Saskatchewan Roughriders wide receiver Duron Carter (89) runs through the end zone after scoring a touchdown during the second half of the CFL Eastern final, Sunday, November 19, 2017 in Toronto. THE CANADIAN PRESS/Mark Blinch

Duron Carter has had stints with NFL teams.

Scouts from NFL teams have been at Saskatchewan Roughriders games this season, watching Carter play receiver and defensive back for the CFL team.

And Roughriders head coach-GM Chris Jones said Monday that he plans to sit down with Carter in the coming days to find out if the player is interested in signing with an NFL team.

But Carter isn’t sure if he wants to go south — assuming an offer comes — or stay with the Roughriders for a second season.

“If the NFL calls, it’s not like I’ll deny their phone call,” Carter told reporters Monday as the Roughriders cleaned out their lockers at Mosaic Stadium. “But I have my own life and stuff I’ve got to get handled.

“I can’t just be waiting on other people and how they feel or if they don’t want to pull the trigger because they have some type of reservations. I can’t be waiting on them.”

Carter has had a colourful history in the CFL, with incidents ranging from bumping into an opposing coach to getting into altercations with teammates in Montreal and Saskatchewan.

But there’s no denying Carter’s talent. He led the Roughriders in the 2017 regular season with 1,043 receiving yards and eight touchdown catches and also had a 43-yard interception return for a TD during his first start as a cornerback.

On Sunday, Carter led Saskatchewan with six catches for 99 yards and a touchdown in its 25-21 loss to the host Toronto Argonauts in the CFL’s East Division final.

He has had workouts or meetings with NFL teams during his career and even signed with the Indianapolis Colts in 2015, but his career in that league has been a non-starter. Now Carter faces the prospect of getting another shot in the NFL — or ignoring that league altogether.

“Playing in the NFL has been my dream since I could remember,” said Carter, the son of former NFL star Cris Carter. “That’s what I’ve always wanted to do, so in the right situation, I would definitely love to be there.

“But I’m 26 going on 27, I’ve got to make some life choices in a sense. I can’t just keep waiting … (Saskatchewan) definitely feels like home, so I would love to stay.”

Roughriders defensive end Willie Jefferson also is set to become a free agent in February and he too reportedly is on the radar of some NFL teams.

But Jones implied Monday that something may happen on the Jefferson front sooner rather than later.

“It’s a little bit premature (to discuss possibilities) on Willie as well,” Jones said. “There will be some clarification on Willie pretty soon.”

The 2018 season starts now for Jones.

The Roughriders’ head honcho and his staff are examining the roster, trying to determine which players will be back and who will be moving on.

“I do think that it’s a little bit premature for me to sit here and say, ‘We’ve definitely got a hole here. We’ve got a hole there,’ ” Jones said. “If we have our roster set basically like it is right now, we’ve got a solid roster.”

Reports have said the Roughriders have more than 20 players who could enter free agency in February, but Jones suggested that the team already has verbal agreements in place with some of those players. He noted that there are 13 players whose situations are up in the air.

The goal is to keep most of the players who were with the team in 2017, provided the salary cap can be managed.

“Our goal since we’ve been here is to make sure that we put an entire team (together) that can compete on all three levels,” Jones said. “We were close this year. If we can get the biggest majority of our group back, certainly we’re going to be very competitive in the future.”

Speaking of contract negotiations, the three-year deal Jones signed when he joined the Roughriders in December of 2015 is to expire after the 2018 campaign.

Jones said Monday that he and Roughriders president-CEO Craig Reynolds wanted to get through the 2017 season before discussing a possible extension. Now that Saskatchewan is out of the playoffs, the two men are supposed to meet Tuesday.

Jones met the media Monday with a page from the CFL rulebook in hand.

He said he had been re-reading the rule on roughing the passer, trying to figure out why his challenge of a non-call during Sunday’s game in Toronto was denied.

During the first quarter, Argos defensive end Victor Butler appeared to hit quarterback Kevin Glenn under the chin on a pass attempt that was intercepted and returned for a 39-yard touchdown by linebacker Terrance Plummer.

Jones challenged, but the Command Centre denied it and the TD stood.

On Monday, Jones said he still believes that Glenn was hit in the neck area, so the head coach remains unsure why the challenge was denied. Having said that …

“That’s not the only thing that cost us that football game,” Jones said. “I want to make that abundantly clear. We’re not trying to make excuses or point fingers or anything else. That was a challenge, I lost the challenge, but there were plenty of other opportunities that we had to win that football game and unfortunately we didn’t.”

For his part, Glenn was somewhat reticent to discuss the non-call.

“I don’t know if I should comment about this because I haven’t received my last cheque, so (league officials) may be able to still try to fine me after I say this,” he said with a smirk. “But I’ve seen other QBs in the league get that call — and I’ll leave it at that.”