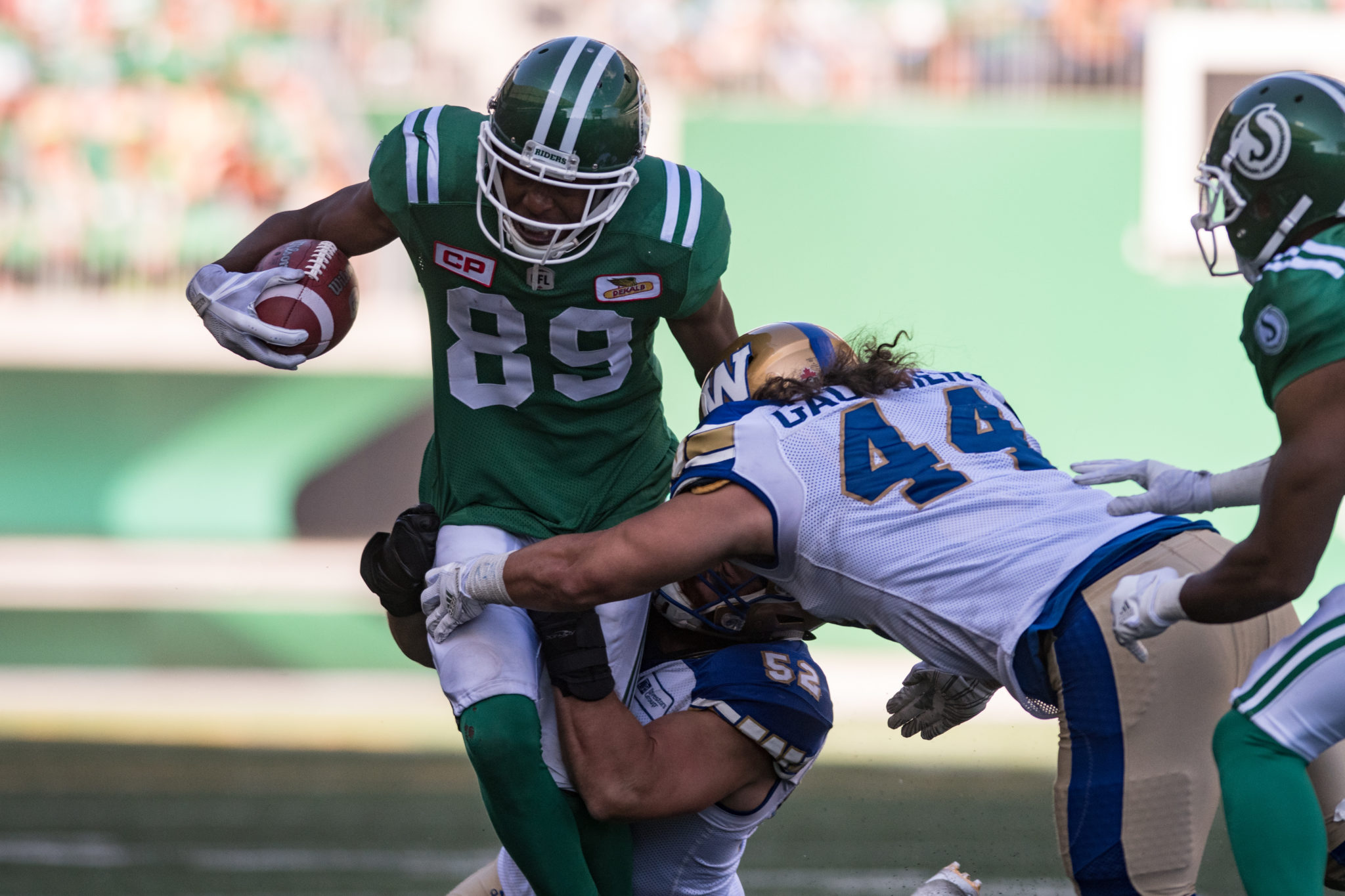 The Saskatchewan Roughriders receiver took to Twitter after Sunday’s Labour Day Classic to complain that he had been spit on by a Winnipeg Blue Bombers fan prior to the CFL game at Mosaic Stadium.

Carter discussed the incident with the media after Tuesday’s practice. When asked if he had been in touch with the Regina Police Service, he replied: “Oh, no. It’s just spit. No police. None of that.”

“I understand the trash talk,” Carter added. “I understand being fanatics. I’m a fan of most sports myself. But the spitting … If it was (Bombers quarterback) Matt Nichols or (Winnipeg receiver) Weston Dressler, our fans shouldn’t be spitting on them. It’s just classless.”

Carter said the incident Sunday happened after the Roughriders were introduced. He ran the length of the field to interact with the fans in Pil Country at the south end of the stadium, where a number of Winnipeg fans were standing in the front row.

According to Carter, that’s when one of the Bombers fans spit on him. Carter said he got the attention of a security guard and told her what had happened; it was his belief that the fan was escorted out of the stadium.

Carter didn’t say anything about the incident until after he got home following Saskatchewan’s 38-24 win.

“I played too much football,” he said when asked why he waited to share the news. “I completely forgot about it and then I get on Twitter, I see the picture and I see the guy right there in the picture. I’m like, ‘Man, that’s the guy that spit on me!’

“I was sitting in my bed and had a little fun with Twitter and it just got completely out of control.”

Things could get out of control Saturday, too. The Roughriders are to visit the Bombers at Investors Group Field in a rematch — and Carter could be the target of more abuse.

He said Tuesday he expects to hear “a bunch of people yelling at me,” but he can accept that. He also can handle signs and “anything creative” that Bombers fans want to do.

“Anything outside of physically touching me, go ahead!” Carter said. “I love it.”

Roughriders head coach-GM Chris Jones said he hadn’t heard about the spitting incident until Tuesday morning. Unlike Carter, Jones said occurrences like that are part of football.

“In today’s day and age, things like that happen, unfortunately,” Jones said.

A few folks in Winnipeg — including some Bombers players — weren’t happy with what they thought were stalling tactics employed by the Roughriders during Sunday’s game.

On three occasions, Saskatchewan defenders stayed down on the turf and sought medical attention just as the Bombers were trying to run their hurry-up offence.

“They play a very up-tempo style and the guys get fatigued,” Jones said Tuesday when asked about the incidents.

One of the players who took a knee was defensive tackle Ese Mrabure, who was playing with a club on his right hand to protect the bone he broke during Saskatchewan’s game against the Edmonton Eskimos on Aug. 25.

Mrabure said Tuesday that he took a shot on the club, which didn’t have enough padding inside. The resulting pain forced him to seek attention.

“It’s a violent sport and playing with a broken hand, you never know when it’s going to give or when you will take that one shot that will get you down on one knee like myself,” Mrabure said. “That’s how it was.”

Mrabure declined to comment when asked if the outcry amounted to sour grapes on the part of Winnipeggers.

“It was mostly the fans and we all know fans,” he said. “Fans have minds of their own — everybody has a mind of their own, really — but I can’t blame Winnipeg for anything that the fans are talking about.

“They’re the fans. They’re not on the field with us. They’re not in the locker room with (the Bombers). I just leave it at that.”

Jones confirmed that both players will be out of the lineup for Saturday’s rematch.

Aaron Milton, who had been lining up at linebacker, was working at running back Tuesday. And Denzel Radford, who had been practising as a defensive back, was with the receivers Tuesday.

The Roughriders led Sunday’s game 34-16 at halftime, producing their most first-half points since they had 37 against the Toronto Argonauts in a 46-36 victory on July 11, 2009.

But Saskatchewan managed just four points after the break against Winnipeg while giving up eight. An interception in the end zone by Ed Gainey snuffed out another Bombers drive in the second half.

A week earlier in Edmonton, the Roughriders led 26-6 at halftime before allowing 25 points in the second half of a 54-31 victory over the Eskimos.

“We addressed (second-half letdowns) this morning and I think that’s the theme of the week,” Jones said. “We’ve got to be more consistent. We’ve still got to play fast early, but they play two halves for a reason.”