Daniel Thomas is looking to prove himself 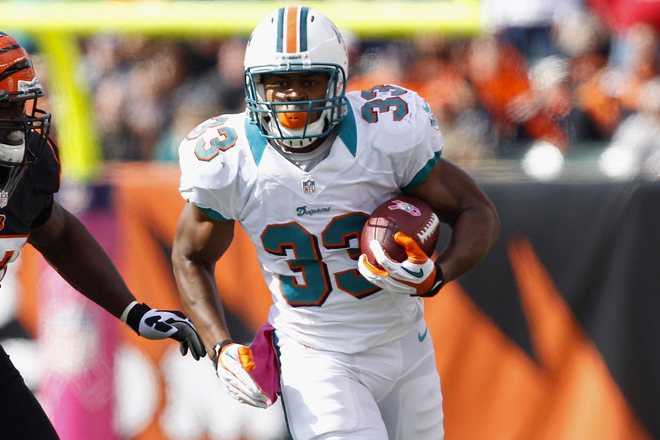 Daniel Thomas is looking to prove himself

Daniel Thomas is ready to prove the doubters wrong.

The 29-year-old running back, whose most-recent appearance in a regular-season game was in 2014 with the Miami Dolphins, is eager to show that he can still deliver on the football field.

The CFL’s Saskatchewan Roughriders are giving him that chance.

“I’ve been in camps since (2014) and I was the same player I used to be,” Thomas said from his off-season home in Hilliard, Fla. “I had got better and the coaches felt the same way, but I just got involved with the numbers game and that kind of thing.

“The one thing that I’m ready to do is prove myself. People have these questions. I don’t want them to think I’m just another American guy trying to come up there to play who’s got nothing left in the tank. That’s one thing I’m really excited about showing everybody.”

After high school, Thomas spent two seasons at a junior college in Mississippi before beginning his NCAA career in 2009 at Kansas State University.

He was named the Big 12’s Offensive Newcomer of the Year and earned All-Big 12 first-team honours in ’09 after rushing for 1,265 yards and 11 touchdowns and adding 257 yards receiving.

The Dolphins selected the 6-foot-0, 230-pounder in the second round (62nd overall) of the 2011 NFL draft and he began his pro career with them that fall.

In 52 games over the next four seasons — spent primarily as a backup — Thomas rushed 409 times for 1,480 yards and 10 touchdowns and caught 55 passes for 412 yards and three majors.

Miami released Thomas prior to the 2014 season, but brought him back in September of that year after losing Knowshon Moreno to injury.

Thomas joined the Chicago Bears in June of 2015, but he was released that August after training camp. He returned to Miami in March of 2016, but was waived in September after the pre-season.

While he has been training ever since in hopes of getting another opportunity, he hasn’t seen action in a regular-season game since Dec. 28, 2014.

“I played in four pre-season games last year, from August through September, so it hasn’t been that long,” Thomas said. “It has just been like a typical off-season for me.

“I still had NFL workouts that I was going to. I had an opportunity to go to the NFL this year, but I felt I’d be better off going to Canada and giving it a shot.”

Wait a second: An NFL veteran turned his back on another shot in that league to try his luck in a different loop? What’s up with that?

“In the NFL, you get the contract, but nothing’s guaranteed,” Thomas replied. “Sure, you can bet on yourself, but at the same time, I’ve been around that league for a while and I know it comes down to a numbers game. That’s what it came down to: I got released by the Dolphins because a guy could play special teams better than I could.

“I feel like I can go to Canada, tune some things up and see what happens. I just want an opportunity to play a full season again.”

Thomas is one of three tailbacks currently on Saskatchewan’s roster, joining Cameron Marshall and Greg Morris.

Thomas has done some research on the Roughriders (including looking at pictures of their facilities at new Mosaic Stadium) and on the CFL (he knew the field is larger than the NFL field, but wasn’t aware until he was told that teams deploy 12 players at a time) in preparation for a new chapter in his career.

“I’m a quick learner when it comes to football, the terminology and things like that,” Thomas said. “I’ve still got to run and read my blocks; that’s all I need to know. I still have to run my routes and catch the ball, which is what I’ve been doing for I don’t know how many years.

“Hopefully I can get the rules down in mini-camp and training camp. Other than that, I’m just running for my life.”

“A lot of NFL guys go up (to the CFL) but they don’t really do anything,” Thomas said. “I don’t want to be that guy. That’s what I’m looking forward to proving.”