Looking for a win in Winnipeg 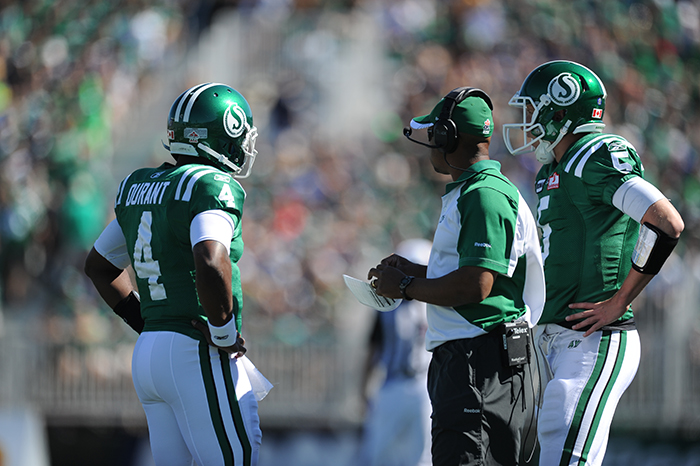 Looking for a win in Winnipeg

The Saskatchewan Roughriders are coming off one of the biggest blowout wins in CFL history, but as they prepare to take on the same Winnipeg Blue Bombers team that they beat 52-0 on September 2, it is the Riders that have something to prove and not the Bombers when the two collide in Winnipeg Sunday afternoon according to their Head Coach.

“We have something to prove as well,” Corey Chamblin said. “It’s not like we are 11-0, we are fighting for our lives to get back into it in the West. Last week was last week and this week is this week.”

Quarterback Darian Durant is well aware that his team will walk into a very hostile environment—one that perhaps will be more hostile after the one-sided outcome last weekend.

“No doubt about it,” Durant proclaimed. “We have to make sure that we are ready because those guys will be fired up. Going into Winnipeg is always tough and when you see what happened last week, you know they are going to be ready. We just have to come in and try to set the tone and take their crowd out of the game.  If we can do that, it allows us to execute our game-plan a little easier.”

To the naked eye, it seemed as if the Riders played a perfect football game last weekend in winning by 52, but Durant cautions that even though it looked great, the film showed there were some parts of the game that needed improvement and that it wasn’t as great as it looked.

“Nothing’s perfect and you never play a perfect game,” Durant said. “When you look at the film, there are some things that need to be corrected and fixed.  Those corrections need to be made if we are going to be successful and get better.”

When you beat a team by 52 points and you know that the schedule calls for another game against that same team seven days later, one could not blame the football team if perhaps they didn’t give it their all in practice this week.  Defensive tackle Keith Shologan says you will not catch his football team disrespecting the Bombers by not getting up for this game the same way they would any other game.

“The coaches have been saying all week that we can’t take them lightly because they are going to have a fire under their butt and they are going to come out swinging,” Shologan said. “We know what it’s like to have our lunch handed to us because B.C did it to us last year on our home turf and it didn’t feel good.  We know they want to show us, the league and themselves that they aren’t what they showed last week so I think that first quarter will be important.  If we can get up on them in that first quarter, we will shut down any spark they have and hopefully that results in us walking out of there with two points.”

For players like Brendon LaBatte and Odell Willis, the Labour Day Classic was a chance for them to experience it from the home sidelines instead of the visiting ones. The two former Bombers now head back to Winnipeg to experience the back half of this home and home set as the visitor. For Willis, the outspoken defensive end is fully cognizant of the fact that Winnipeg fans will be on his case all afternoon long after it was perceived that he no longer wanted to wear the blue and gold of the Bombers.

“I expect to hear everything and if the truth be known, they’ve already started on Twitter,” Willis said. “It doesn’t bother me because I like the attention. If they are talking to me and saying things then I feel like I’m doing something good and it takes the heat off the rest of the team because they are focusing on me.”

A win by the Riders would even their record at 5-5.  The Bombers go in with a league worst record of 2-7. Kickoff is at 11 a.m. Saskatchewan time with pre-game festivities beginning on 620 CKRM at 8:30 with “The Touchdown Club” followed by the play-by-play with the best duo in the CFL—Rod Pedersen and Carm Carteri. TSN will provide television coverage from coast-to-coast.

GAME NOTES:
•    Since the Bombers dubbed the back half of this annual home and home set “The Banjo Bowl” in 2004, the teams have split the eight games going 4-4.
•    The Riders have had the two biggest offensive outputs in the CFL this season.  The only performance better than their Week 1 effort against Hamilton when they put 43 points on the board was last weekend’s effort when they scored 52 points against the Bombers
•    Riders quarterback Darian Durant is 39 passing yards away from 17-thousand career yards.
•    The Riders are the least penalized team in the CFL with just 68. 27 of the penalties have been on the offence, 26 on defence and 15 on special teams.