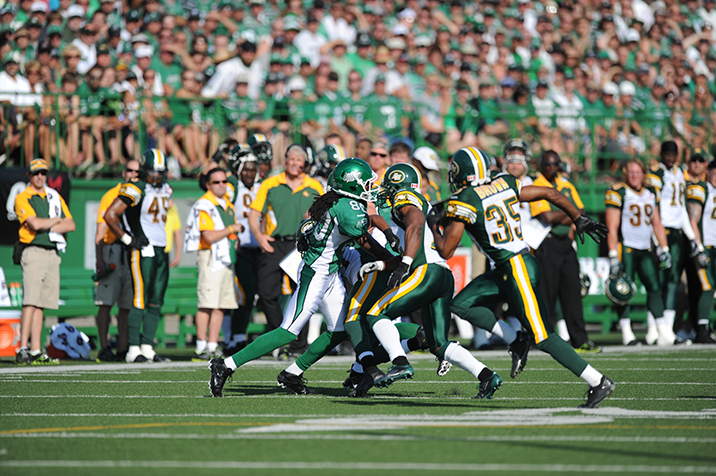 Like many of you, the Saskatchewan Roughriders have taken their summer holiday and now it’s time to get back to work and do what they do best and that is play some football. The 3-2 Riders will be in Edmonton Friday night to take on the 3-2 Eskimos with the winner moving into a first place tie with the idle B.C Lions in what is proving to be once again a very tight Western Division.

As the team heads off to the Alberta capital, some are wondering what is going on with the football team after it blew two consecutive big fourth quarter leads and lost. Quarterback Darian Durant says it’s a case where everyone needs to take a step back and look at the overall picture.

“First and foremost, we’re sitting in first place. That’s what’s most important at the end of the day. I don’t care about how many games you win or lose. If you’re on top of the standings, what does it matter?” Durant said while responding to questions from the media on Wednesday. “We’re still sitting in a good spot. We have a chance to create a little separation here and that’s what we’re looking forward to.”

Durant also insisted that the past two weeks have not resulted in the team’s confidence wavering any saying they are just as determined and focused as they have ever been and that will hopefully show itself on the Commonwealth Stadium turf.

“If you know you’re this close to something, are you going to give up? Are you going to think that you can’t succeed or you can’t get it done? That’s never our mentality. Our confidence will never go down,” Durant stated. “We feel good about where we are. We just have to finish. It’s very simple. We just have to get it done in the fourth quarter.  They don’t crown a champion after the third. You’ve got to play that fourth quarter and get it done, so that’s what it’s all about.”

Whether it be the first quarter or the fourth quarter, the Riders expect to see a lot of a guy who used to wear the “S” on his head, but now wears the Edmonton helmet—Hugh Charles. The running back was traded to Edmonton late last season and he has flourished this year as he has become a major part of the Eskimos offence. Middle linebacker Shomari Williams knows Charles is someone they have to keep an eye on whether it be in the run or the pass game.

“He’s a little more dangerous there than he was here because he is catching the football there,” Williams said. “We knew he could catch the football here, but for whatever reason, the scheme didn’t call for him to catch the ball. He’s getting it now though and he’s making an impact for them, but we will be ready for him.”

The last time these teams met, the Riders defence held Edmonton to just one point as they registered a 17-1 win. Williams says the team has gone back and looked at the game film of that contest to see just what they did right, but he adds the Eskimos are a lot better team than the squad that they met in Week 2 of the season.

“We have watched the film to see what we did, but we’ve also seen a lot of new stuff from them and I think they are a much better team now than what they were that day.  We just hope we can have the same success against them and make it tough for them to move the ball because if we do that, we know we can come out of there with a win.”

After  having a bye week, it’s always interesting to see how guys come back, but head coach Corey Chamblin is happy with the output he has seen this week and he hopes that translates into a solid performance.

“There is no such thing as a perfect practice and there is no guarantee of a win just because you have good energy at practice,” Chamblin said. “You have to go out and play the game, but if they come out with the right energy and the right focus we just have to hope it materializes into a win.”

Game time is 7:30. 620 CKRM will have the pre-game show starting with “The Touchdown Club” at 5 o’clock followed by the play-by-play with Rod Pedersen and Carm Carteri. TSN will provide television coverage across Canada.

•    Sandro DeAngelis will make his debut in a Riders uniform. The kicker has been out of action since the 2010 season. He is the CFL’s most accurate field goal kicker as he has made 82.8 percent of his attempts

•    Running back Kory Sheets has the most runs for first downs in the CFL with 25. He is also tied for 2nd for most 10 plus yard runs with several others at 11. B.C.’s Andrew Harris has 11.