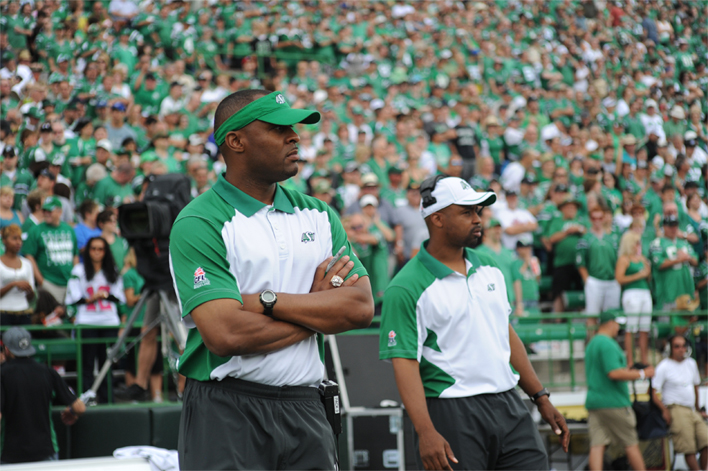 The CFL season is only five games old for the Saskatchewan Roughriders, but the team is enjoying its one and only bye this season. When the team gathers later this week to start preparing for an August 10th road game in Edmonton, they will begin a stretch of 13 straight weeks of football — 16 if the team is to get to its desired goal which is the 100th Grey Cup game at Toronto’s Rogers Centre.

It has been a roller-coaster season for Corey Chamblin’s crew as they started the season with three straight wins only to arguably let two wins slip through their fingers as they blew big 4th quarter leads to Calgary and Hamilton losing both. The two losses have left a lot of questions amongst the fanbase as to what type of football team the Riders have this year. That question can’t be answered completely at this time, but here is a look at how things have gone positionally in the first five weeks.

QUARTERBACK   –  Darian Durant isn’t setting the world on fire with his play, but he certainly is managing the game better and that is what the coaching staff wants to see. Durant started with a bang throwing four touchdown passes against Hamilton, but it took him another four games to throw another four. Costly 4th quarter turnovers against Calgary and Hamilton hurt the football team, but Durant has done far more good than bad this season and has thrown a CFL low two interceptions in 170 attempts. Back-up Drew Willy has come in in short yardage situations to move the chains and has done what he has been asked to do. Willy even got his first pro TD toss in Calgary throwing one to Neal Hughes

RUNNING BACK – Kory Sheets was expected to be an impact player when he came to Riderville after stints in the NFL with the San Francisco 49ers, Carolina Panthers and Miami Dolphins. He has not disappointed. Sheets gives the Riders an explosive weapon at running back not seen since the days of Kenton Keith as he can make a big play out of nothing. After five weeks, he was 3rd in league rushing with 362 yards and leads all running backs in touchdowns with 6. That figure is also tied for the CFL lead with Calgary receiver Nik Lewis and Hamilton receiver Chris Williams. It hasn’t taken Sheets long to become a fan favourite and its expected that he will only get better with experience.

RECEIVERS – The receiving corps took a huge hit when Rob Bagg was sidelined for the season with a knee injury. Weston Dressler and Chris Getzlaf have gotten off to nice starts, but after that, there has been a noticeable dropoff when it comes to catches. Dressler started the season with a 13 catch effort against the Tiger-Cats and he has just kept playing the type of football that he has become famous for. His 35 catches trail just Lewis in that category and he is well on his way to another one thousand yard season. One could argue Dressler has been the team’s most outstanding player through the first five weeks. Getzlaf has caught 22 balls, but he will tell you that he should have more as he has dropped a couple of key passes at big times in the football game. That being said, Getzlaf is still a dependable target for Durant and should not have a problem in joining Dressler as a 1000 yard receiver in 2012.  After Getzlaf and Dressler, a number three option has not emerged. Justin Harper, Efrem Hill, Jordan Sisco, Taj Smith and newly acquired Terrence Jeffers-Harris are looking to capitalize on opportunities that are thrown their way. Smith had a nice debut in Week 5 making one catch, but what a catch it was as it turned into a 74 yard touchdown. With Bagg on the shelf, the job of speedy wideout may fall on his shoulders.

OFFENSIVE LINE – A new look offensive line certainly hasn’t had any problems getting on the same page. Off-season acquisitions Brendon LaBatte, Dominic Picard and Chris Patrick have all performed well and number one draft pick Ben Heenan has perhaps exceeded the expectations of the coaching staff by starting in Week 1 thanks to injury and showing that he belongs. While Heenan has performed well, another U of S grad Patrick Neufeld has also shown he has what it takes to be a CFL’er as he has had to come in whether it be by injury or changing the ratio and has done the job and then some. While the line has been solid, one can expect it will get better after the break as Chris Best has not yet played due to a foot injury. The question the coaching staff will have when the team gets back if Best is healthy is where does he go and who sits.

DEFENSIVE LINE – One of the biggest questions going into the 2012 season seems to have been answered. Off-season acquisition Odell Willis only has two sacks as does Brent Hawkins, but both have gotten to the quarterback and created pressure that had been missing for the past couple of years. Willis and Hawkins still have a long ways to go to make Rider fans forget about the Chick/Baggs duo, but their play has been a vast improvement from the past couple of years. Hawkins seems to be over shoulder problems that nagged him for two years while Willis brings an energy to the squad that seems to be rubbing off.

LINEBACKERS – The jury may still be out on the linebackers, but early reports would seem to suggest the squad is happy with the play of that unit. Shomari Williams has had his highs and lows in the middle, but he seems to be adapting to the position better and better with each week. Rookie linebacker Abraham Kromah has been a pleasant surprise and is already being talked about in some circles as an early candidate for rookie of the year. He is 2nd in the league in tackles with 31. NFL veteran Tyron Brackenridge has also not had a problem adapting to the CFL game as he has played quite well in the first five weeks.

SECONDARY – If there has been a weak spot to the 2012 Riders through five games, it may be the secondary. However, this group has been ravaged by injury as Woodny Turenne, Eddie Russ and Tristan Jackson have all been hurt. Chris McKenzie has been solid at defensive half and James Patrick has also had the type of season expected of him, but the same can not be said for Nick Graham who has admittedly struggled. Graham is trying to put an early season benching behind him and show the coaching staff that he has what it takes to be a CFL’er and the message that was sent to him by Corey Chamblin has seemingly worked. Craig Butler has not had any signs of a sophomore jinx when he comes in to play nickel and Paul Woldu when given a chance has shown some solid tackling when called upon. This group knows it needs to get better as the season goes along and once they get healthy, they will. The coaching of former B.C Lion Barron Miles will also make this group better.

SPECIAL TEAMS – Chris Milo has had an up and down start to the season. The 2nd year Rider leads the league in punting with a 46.4 yard average, but Milo has struggled in the kicking game. Going into the break, Milo has missed six field goals (11 for 17) which is two more than he missed all of last season when he connected on 22 of 26 attempts. The coaching staff will need to see more out of Milo on three pointers if he is to continue in that capacity. As for his punting, there are no problems.

Tristan Jackson provided the play of the year when he returned a missed Paul McCallum field goal 129 yards for a touchdown in a Week 3 win over the B.C Lions. He has provided a spark in the return game and its expected he may break a couple of more before the season is over and flip the field with a big play every now and then.

OVERALL – While the last two weeks have not been good ones for the football team, the positives have far outweighed the negatives so far. The team under Chamblin has shown through five weeks that they are nothing like the team that struggled to a five win season in 2012. Its too early to tell if the team has what it takes to represent the West at the Grey Cup and if the first five weeks are any indication, it will be a real battle as not much separates the four teams in the division. The Rider brand of football has been an exciting brand that fans have been wanting and while each week doesn’t result in a win, fans can’t say they were disappointed at the overall effort given. What will the next 13 weeks bring? Lets just say this roller-coaster ride is a long ways from ending so make sure that watermelon is on tightly because it should be a lot of fun over the next couple of months.