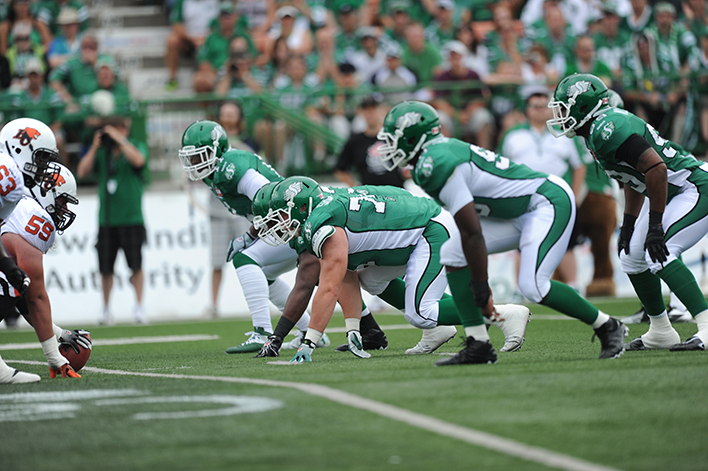 “It’s a slap in the face just because we did it to ourselves yet again”.  That quote from Riders defensive lineman Keith Shologan maybe sums it up the best.

For the second straight week, the Saskatchewan Roughriders blew an 18 point lead in the 4th quarter and ended up losing the football game as they were outscored 35-34 by the Hamilton Tiger-Cats on Saturday afternoon to lose a football game that they should have won.

All looked good for the green and white when on the last play of the 3rd quarter, Darian Durant connected on his second touchdown toss of the day to Jock Sanders giving the Riders a 32-14 lead, but it was all downhill from there for the Riders as Hamilton scored three fourth-quarter touchdowns to erase the deficit and win the game.

“I don’t want to compare this week to last, but once again we just have to finish,” said a disappointed Durant who threw for 380 yards in a losing cause. “When you get a team down at home, you have to finish them and we didn’t do that. We just beat ourselves again.”

Durant feels it’s a case where all areas of the game have to be looked at and corrected and that no one needs to start pointing fingers or asking questions of themselves.

“Offensively, we’re not making plays when we need to, defensively we’re not making plays when we need to and on special teams, we are not capitalizing on field goals. We just need to be better in all phases of the game,” Durant said. “That being said if we make that field goal late, we might be talking about a win and our mood is entirely different. We had a chance to put some space between us and our divisional opponents and create a cushion, but we let it slip.”

“My teammates deserved better than that, “Milo conceded. “They put me in a position to win the game and I didn’t. That one is on me.”

Head Coach Corey Chamblin was not happy with the end result, but he refuses to go back to square one after losing his second straight game following three wins to open up the 2012 season.

“The sky is not falling.” Chamblin said. “We are still 3-2 and I still think we are a good football team. We have let some good opportunities slip through our fingers. We just have to look at each area of the game and address the issues and make the corrections that are necessary to that we go forth in a winning manner.”

The team now has some time off as they hit a bye in the schedule. The squad will take next weekend off before getting back on the field in Edmonton on Friday, August 10. As they head out, Chamblin says he gave them one message.

“I told the guys to get re-focussed because we have 13 games to go when they get back.” Chamblin said. “We are still a good football team and we have put ourselves in a position to be in first place in the West at 3-2 going into the bye. The challenge now is to come back and work like a first place team.”

Wide receiver Taj Smith made his first catch in the CFL a memorable one. Smith hauled in a pass from Darian Durant and ran 74 yards for a touchdown.

Weston Dressler has now caught a pass in 32 straight games.

The game was a sell-out. It’s the first sellout of the 2012 season.