Ken Miller Calls it a Career 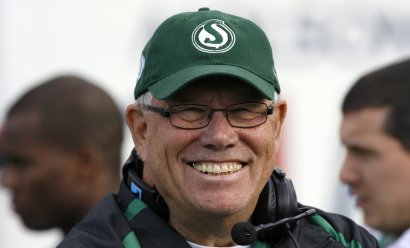 Ken Miller Calls it a Career

By Mitchell Blair
For Riderville.com

The first part of Ken Miller’s head coaching career with the Saskatchewan Roughriders ended at Edmonton’s Commonwealth Stadium as he walked off the field after losing in the 2010 Grey Cup to the Montreal Alouettes. The second, and final part of Miller’s head coaching career will end in the same spot this Friday night with hopefully a different result.

The 70-year-old Miller announced Monday that he is going to step down as both head coach and Vice-President of Football Operations following the Riders last game of the year which will go against the Eskimos.

Fighting at times to control his emotions, Miller thanked his wife Maureen for allowing him to have the role he had with the organization since coming on board in 2007 as an offensive coordinator under Kent Austin. He also thanked President and CEO Jim Hopson, Board of Governors chair Roger Brandvold, General Manager Brendan Taman, his assistant coaches, football operations coordinator Jeremy O’Day and of course, the players he mentored

“I am thankful to have had the opportunity to work with many including the men who have worn the Roughrider uniform and occupied our locker room,” a solemn sounding Miller said. “These men—the Roughrider players — have done their best to keep me young. They have made me laugh, they have made me cry and they have given me tremendous latitude in the work I’ve done with them. I believe in them and I appreciate and care for them individually and collectively.”

Miller also took to thank the Rider Nation—no matter if they were supporters of the team or critics.

“Fans are supposed to be involved, from the silent supporters to the vitriolic, vocal and cynical critics and everyone in between.” Miller said. “I applaud your fervor and I appreciate your fanaticism. It was great to work in a place where people cared so much about what I did on a day-to-day basis.”

Hopson says while Miller’s return to the head coaching wars in September didn’t turn out the way the organization hoped it would, he believes it shouldn’t tarnish what Miller has accomplished during his time in Riderville.

“Ken has contributed so much to this organization on and off the field. In 2007, he was the offensive coordinator when we won the Grey Cup, in the next three years; we had three home playoff games, a first place finish and back to back appearances in the Grey Cup.” Hopson stated. “All of that success was special for our fans and our organization and a lot of that was because of the way Ken conducted himself and the attributes and values that he brought and things that will stay in that room.”

Many of the players found out about Miller’s plans as they showed up to Mosaic Stadium Monday morning when the team started its final week of preparation.

Quarterback Darian Durant knew of his plans before that and said it’s a sad day.

“He holds a special place in my heart,” Durant said. “He gave me my shot and he stayed with me. In that time, he has gotten this team and myself to places that it hasn’t been before. He will definitely be missed around here.”

Linebacker Mike McCullough will also miss Miller and took time to take a swipe at those who have been extremely negative about his head coach over the last couple of months.

“He’s one of the best Rider coaches ever,” McCullough insisted. “I think some people have a short memory and I think they need to re-evaluate some of their thoughts. We still have a chance to finish 500 under him this season which is amazing considering the way we started the season.  I think these people have to take a step back and take a look at what he has done. We’ve been two plays away from two Grey Cup titles and it pisses me off to hear some of the things that have been said.  He’s not just a great coach, but he’s a great man.”

As Miller, who has compiled a win-loss record of 36-26-1 during his tenure of head coach, prepares to ride off into the sunset, he believes this team is very capable of not only being at and winning the Grey Cup in 2013 when it will be played in Regina, but that they can bounce back from this year’s poor record and be in the big game in 2012.

“Certainly, the roster will go through some change and some modification, but there is a strong core of players in that room,” Miller said. “I think they are poised to do very, very well next year and the next head coach inherits what I think is a very good team.”

Like it was last year, the challenge for Hopson and the organization is to find a successor to Miller. He was asked if there is another Ken Miller out there.

“I think so,” Hopson answered. “His wisdom will be hard to replace, but we just hope we can find another Ken Miller who can get us back to where we belong and that is in the playoff hunt and to the Grey Cup.”